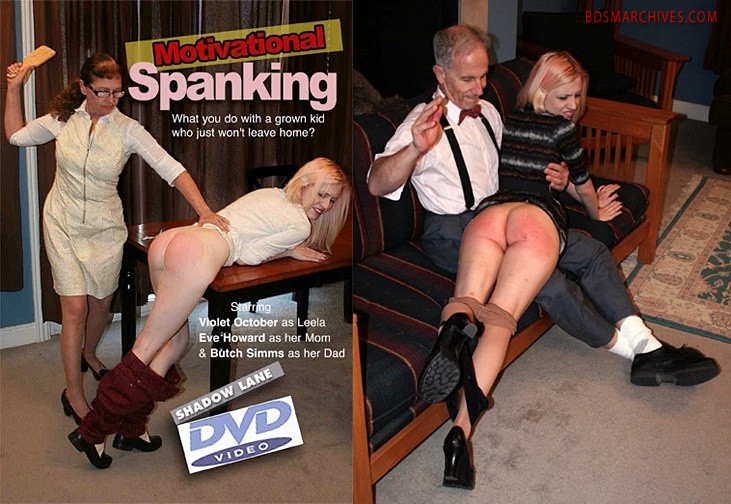 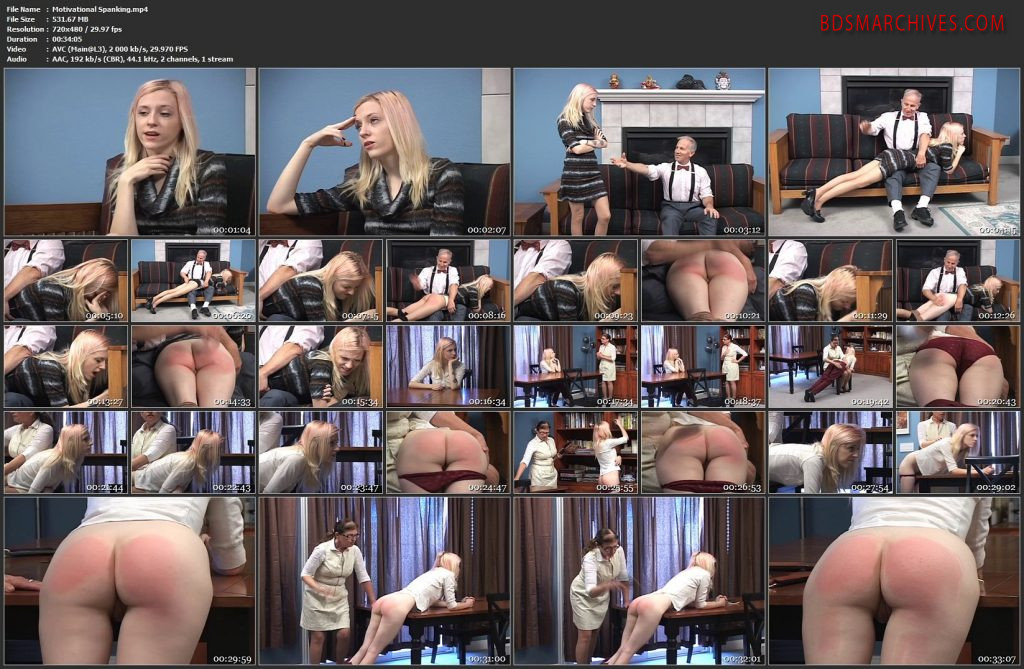 Starring Violet October as Leela, Eve Howard as her mother and Butch Simms as her dad.

Baby boomers getting stuck with grown kids who refuse to leave home is a thing now. It happened to Eve and Butch when Leela came home from college. They even sent their cute, little boomeranger to beauty school, but still she claimed she wasn’t ready to move out. They racked their brains, trying to think of some way to make living at home less desirable to their daughter. Eve reminded Butch that the reason they both left home when they were Leela’s age was to avoid corporal punishment from their old fashioned dads. Convincing Butch that the only way to make lovely Leela hate living at home is to start spanking her, Eve volunteers to confront their live-in brat about moving out, securing a promise from Butch that if her spanking techniques fails to motivate Leela sufficiently, that he will back her up.

As soon as Leela returns from her part time job, Eve demands to know why her daughter is taking so long to find a place of her own. Leela insists she has a plan that involves long term saving prior to relocation. But Eve is not inclined to be patient and accusing her daughter of willfully stalling, takes her over her lap for a hand spanking, first over Leela’s cute jeans, then across the seat of the 22 year old’s matching burgundy bikini panties, then resoundingly on the petite blonde’s bare bottom. Leela is a wilful girl who takes a spanking stoically, but she feels it and it shows as the white turns to pink across her smooth, small, jutting cheeks.

As a hand spanking proves inadequate in convincing her daughter to move out, Eve bends the bare bottomed Leela over for a mixed session with the hairbrush, a collection of leather straps and paddles and a wooden paddle. Smartening her daughter up with wood and leather, Eve continues to lectures her lazy offspring on the pros and cons of leaving home. After dozens of hard whacks and smacks from this small arsenal of corporal punishment instruments, Leela finally agrees to obey her mother’s wishes and move out.

When Leela hesitates just a little too long in making good on her promise to move out, Butch conducts his own private interview with his daughter, which includes a long, hard, over the knee spanking. Beginning in traditional style, over the slender blonde brat’s short skirt, the hand spanking gives way to spanking atop Leela’s black panties, and then to more spanking over the 22 year old’s sheer pantyhose. But Leela is intractable, insisting that she has a plan that involves saving more money before moving out of the house. Butch demonstrates his own plan by pulling her pantyhose down and continuing to spank his daughter on her slim but shapely bare bottom. After a sound spanking from her dad, that leaves her sore and rosy pink, Leela finally agrees to take the leap into adulthood by leaving home.

Crazily enough, in almost thirty years of making spanking videos, Motivational Spanking is Shadow Lane’s first foray into mommy-and-daddy-spanks-daughter territory, but with Butch and Eve putting their own unique spin on the traditional domestic discipline fantasy. Violet October, who really does turn 22 this month, is about as adorable as modern brats get and takes a beautiful spanking. She pouts as her punishment progresses, but knows better than to argue with the inevitable, that stubborn girls get the spankings they deserve. 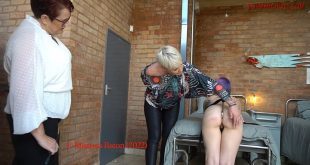