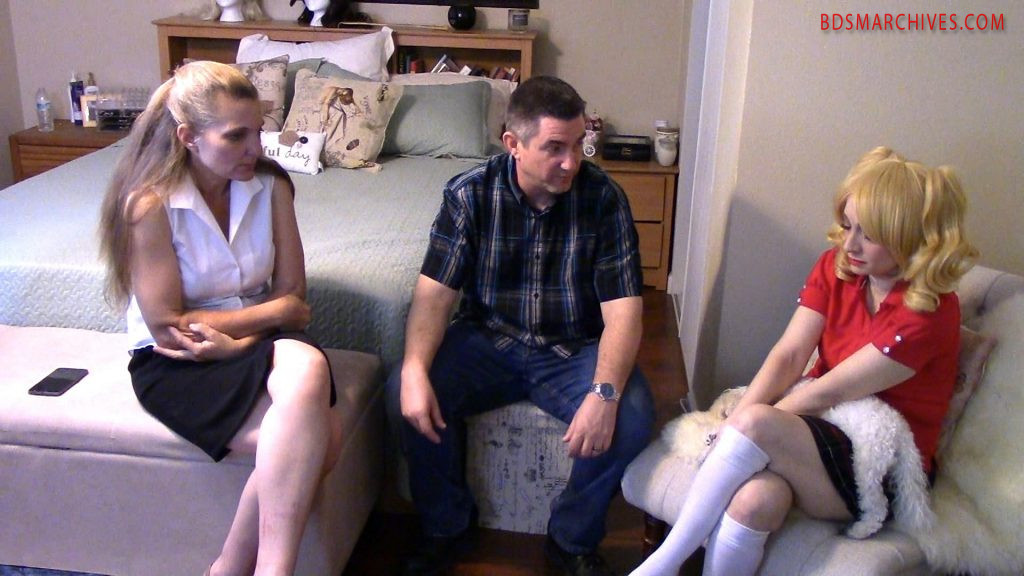 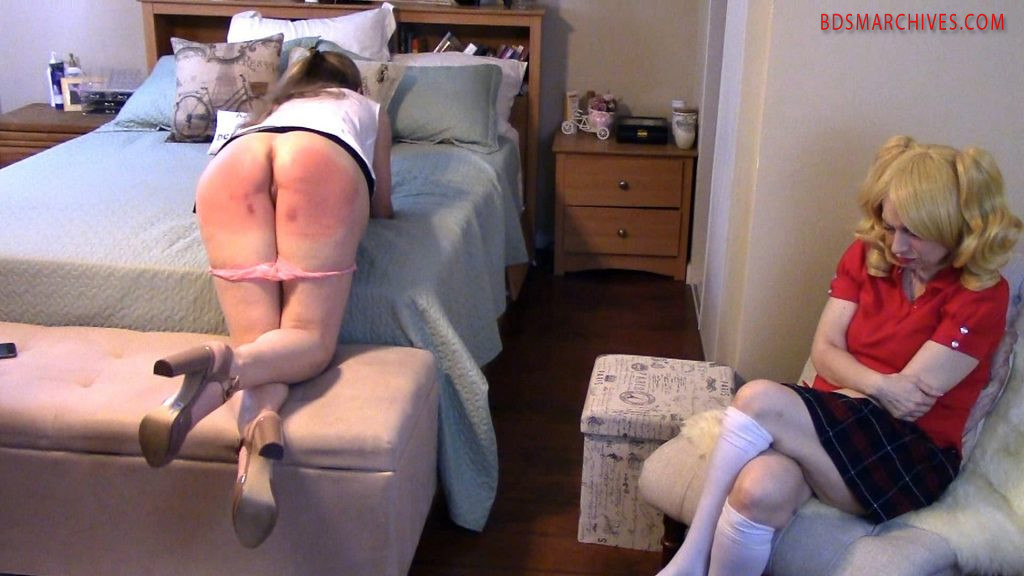 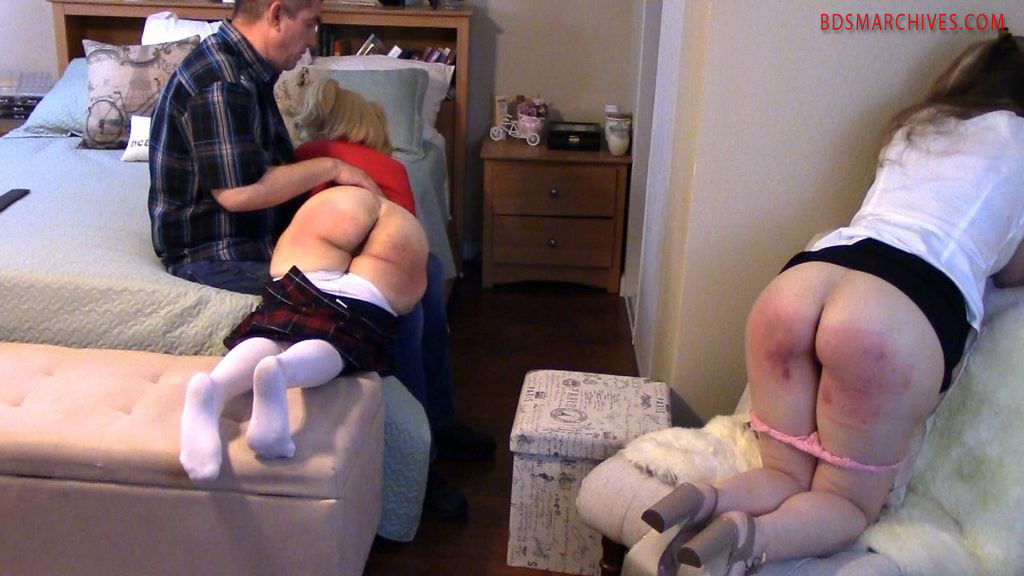 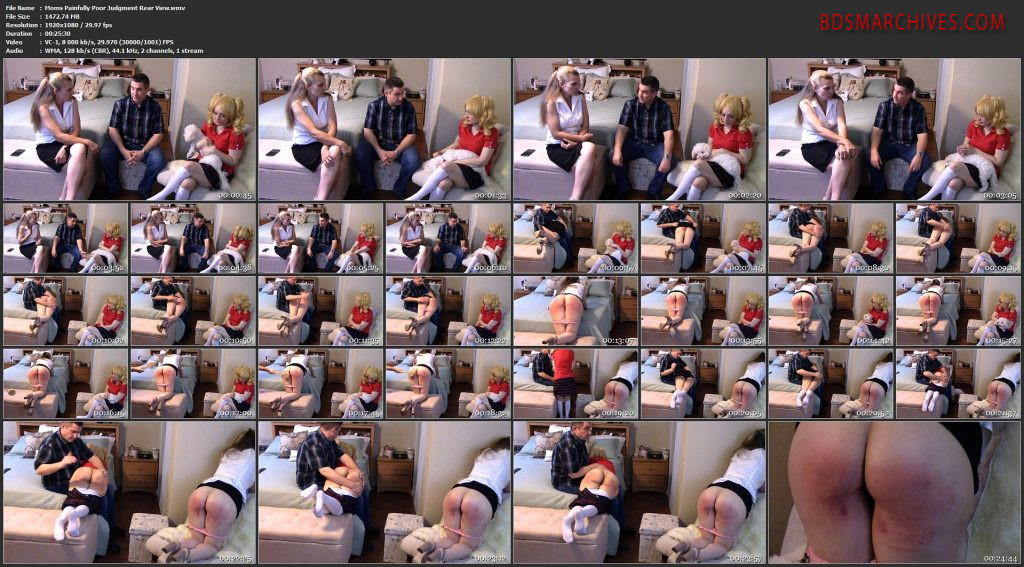 A few days prior, mom, Miss Anna, was pulled over and given a speeding citation shortly after picking up her daughter, Lily Starr, from her high school. She didn’t want her husband, Robert Wolf, to know about it, so she tucked the ticket away in her lingerie drawer and told Lily not to mention it to dad. He’d been doing some laundry, and in putting away some of his wife’s, stumbled on the hidden ticket. It was bad enough to learn that his wife is hiding things from him, but even worse, he noted the time the ticket was cited, and knew that Lily must have been there. This meant that not only did his wife endanger their daughter by speeding with her in the car, but his daughter was hiding things from him too. The two ladies of the house are relaxing in mom and dad’s room, when he comes in to confront them about his discovery. There’s not much denying it to be done, as he has seen the proof, so Anna can only ashamedly confess, promise that she intends to pay for it, and hope he doesn’t make a big deal of it. Lily is feeling very uncomfortable in the situation, and doesn’t understand why Daddy is so upset with her too, when she didn’t even do it! Robert lectures them both about the importance of honesty and working together, and is hurt that they would keep secrets from him that way. He also points out to Anna what a bad example she is setting, teaching Lily to be dishonest with her parents at an age when being open and honest with both of them is especially important. Lily thinks that because she didn’t tell lies, she didn’t do anything wrong, but he reminds her that lying by omission is still lying, and he won’t tolerate being lied to in his own house by his own family! Both girls are shocked when Dad tells them that he’s going to punish both of them, “the old fashioned way.” Since his wife was the main offender, and supposedly the responsible adult, she is going to be dealt with first and more harshly – a hard bare bottom spanking over his knee, followed by kneeling on the bench at the end of the bed for a hard strapping with the razor strop, followed by a merciless paddling with the heavy wooden bath brush! Meanwhile Lily has to stay in her chair witnessing the scene, wincing and squirming, knowing she is going to be spanked next. It’s very embarrassing for Anna to be spanked like a naughty little girl and break down sobbing in front of her daughter, and just as embarrassing for Lily to see her mom being spanked! Over her husband’s knee, Anna soon begins to cry from the hard hand spanking and the humiliating situation in which she finds herself. The strop and brush are even more intense, and result in Anna completely breaking down, sobbing, clutching the bedspread, screaming and begging. None of this is going to do her any good, Robert will only stop when he’s satisfied that her lesson has been learned. Lily feels terrible seeing this happening to her mom, but knows that too much protesting will only earn her a worse spanking too, and that when mom’s ends, hers begins. When he finishes with Anna, her bottom is heavily marked and very sore, and she is well past the point of tears, a true punishment spanking. Now it is Lily’s turn. When she stands up, Robert makes mom kneel in the chair she was sitting in, facing the corner with her spanked bare bottom displayed, while he deals with his little girl. Lily gets the same hard OTK bare bottom spanking mom got, but is spared the horrible strop and bath brush this time. Daddy lectures her about honesty, and makes sure that the message is gotten across that neither of them are ever to be deceitful with him again! A very intense domestic discipline scene with real tears, and a great choice for those who prefer to watch hard spankings with genuine reactions and tears! This version runs 25 minutes, and contains the entire scene in full with a bottom cam view of the spankings. This title is being released in two smaller portions for those who have a preference, or simply don’t care about (or want to pay for) seeing both angles. We will offer this full scene with bottom cam spanking, the bonus reaction cam footage, or a full version with all footage included in one file.