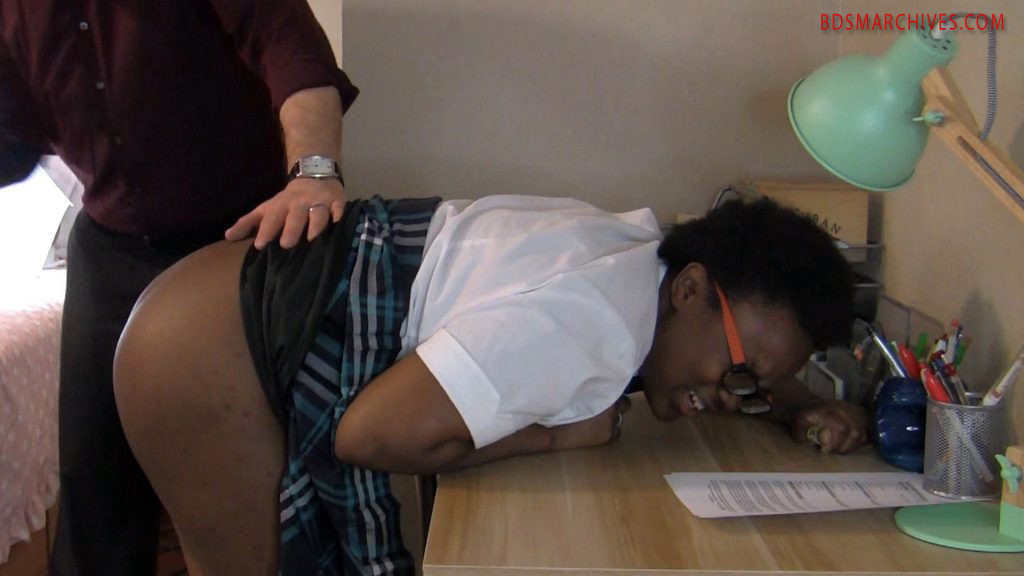 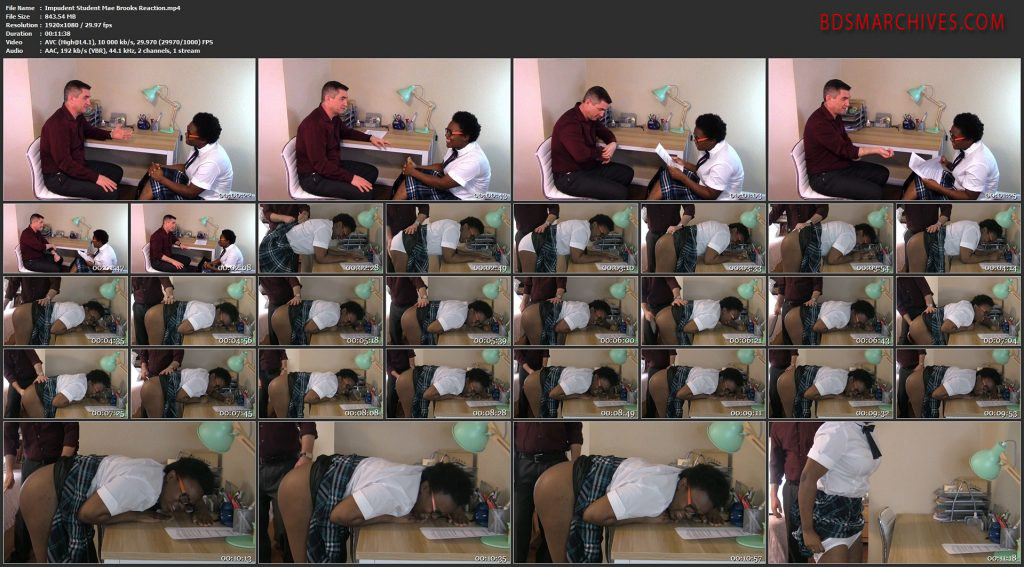 Mae has been kept after class by her teacher, Robert. She had been her usual disruptive self all day, and talking during class. He sits her down and asks her why she feels she can just continue to be defiant and refuse to listen after multiple disciplinary actions. Mae smirks and tells him that there’s really nothing he can do about it, she always gets away with whatever she feels like. What she doesn’t know is that before sitting her down, he spoke with her parents, explained the situation, and requested that they sign a waiver allowing him to use corporal punishment as a last resort alternative to expulsion, as he refuses to allow a student to continue disrupting his class, and all other disciplinary measures have failed. As she reads over the waiver with her parents’ signature, Robert rolls up his sleeves while scolding her for her poor behavior. Once she understands what is going to happen, she is instructed to bend over and place her hands on the desk. Her plaid skirt is lifted, and her teacher spanks her first over her silky full white panties, then pulls them into a wedgie and continues giving her a hard hand spanking, before finally pulling her panties down to her knees. He finishes the hand spanking, then gets his heavy oblong wooden school paddle. Her bottom is thoroughly blistered with the paddle. and then she is given a long hard caning with a thick rattan cane as she sobs and protests. When he decides her bratty little bottom has had enough, he warns her that future insolence will not be tolerated as she pulls her panties back up and rubs her sore bottom. This is a reenactment of a real situation from Mae’s not too distant past school days, with the consequences she used to dream about experiencing for her bratty defiant behavior toward her real life teachers. A great realistic teacher/student scene with a very real and hard punishment spanking, cute schoolgirl, and a strict dominant male spanker. We’re very excited to present 20 year old newcomer Mae Brooks, this was her first professional video shoot, yet she did an amazing job. This was also her very first time being caned! She’s a true lifelong spanko, we think you will love her, and that you will be seeing much more of her soon! This version is in 1080p HD, and shows the full scene from a face/side reaction focused camera so you can see Mae’s facial reactions as she is severely punished as well as a peek of her bottom for a side view of the spanking. An alternate version with a bottom cam view is available just below, where you can see all the spanking action as the blows land on her butt clearly! A full version is coming soon, which will include the intro once followed by the footage of both views of the spanking, that one is best if you don’t want to miss a thing. Enjoy!

Previous The Celebrity – Kelly Payne Collection
Next Punishing Gena, Part up 1 to 4 – Spanking101thevideos