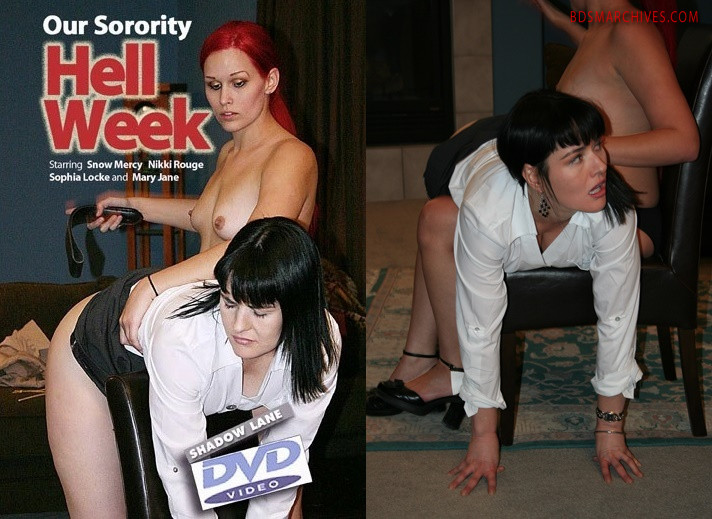 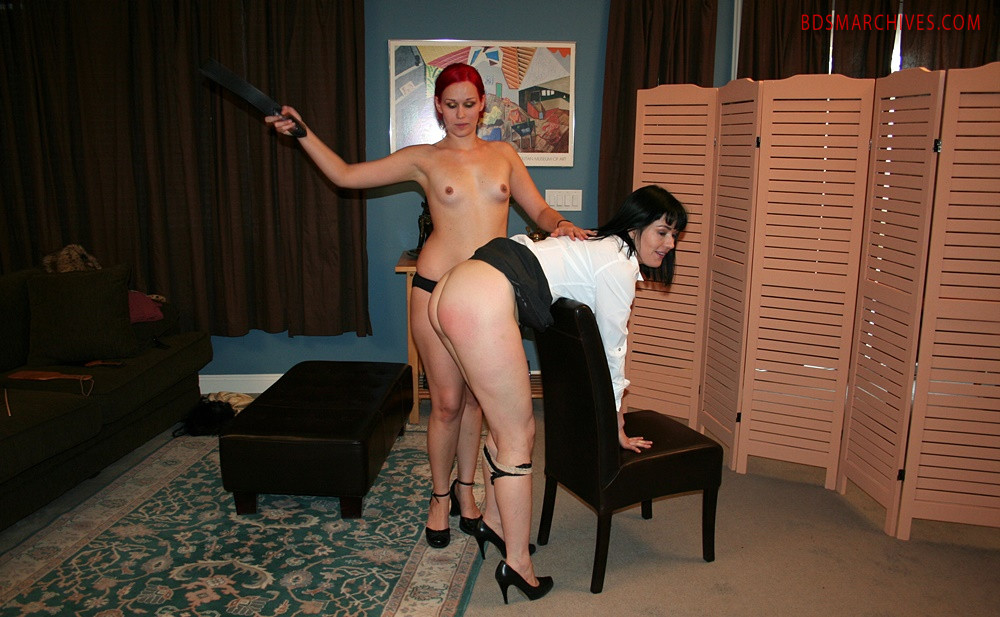 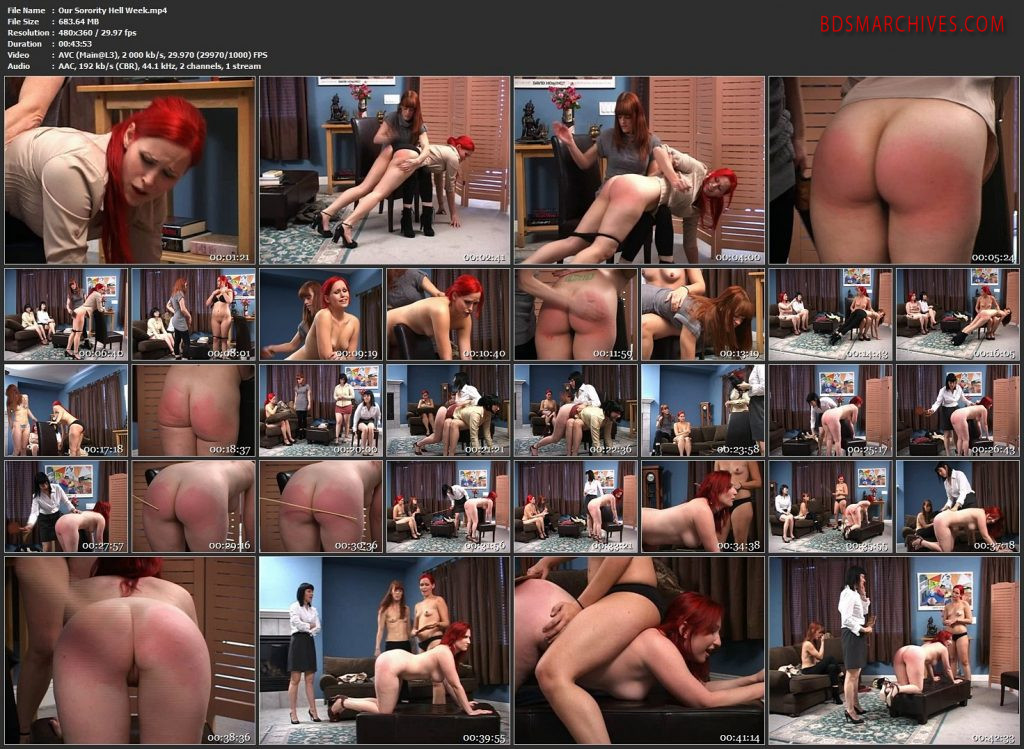 Lambda Sigma Zeta pledges Sophia and Mary Jane find themselves in the middle of hell week, when senior sisters look to bust freshmen on technicalities in order to claim spanking privileges to be executed on the lush posteriors of their pulchritudinous proteges. Statuesque Snow, a senior sister, conducts the first official meeting of the sorority house, invoking the time honored ritual of each girl bringing out a corporal punishment implement they have owned for some time and telling recounting its history. These instruments of correction will also be of use during the hazing to come. Lambda Sigma Zeta has long been known as the “sex” sorority, which explains why all the girls want to get into it, but chapter regulations also mandate top grades must be maintained at all seasons, so that so there’s a constant pull on the girls between studying and partying.

The disciplinary action begins when senior sister Nikki, takes pledge Mary Jane across her lap to reinforce this tenet. The two newbies have been caught drinking wine in the middle of the day instead of studying for their exams and Snow agrees that this will not stand. However, both Mary Jane and Sophia will, by the end of the afternoon, when their bottoms are too sore to sit upon. During Mary Jane’s nude punishment spanking and leather paddling, that young lady is also rated for sporting an overly bold hair color sure to give the sorority a reputation for being slutty as well as fast. The tall, shapely and very beautiful Mary Jane also suffers the indignity of being called out on her tattoo, another decadent indulgence reserved for seniors. Meanwhile, her voluptuous bottom becomes redder and redder, as Nikki unleashes an enthusiastic barrage of smacks and whacks across its silky smooth expanse.

Next up for disciplinary action is Sophia, who too easily allows herself to be led into bad behavior by Mary Jane. Sophia is taken across Snow’s knee for a good, old fashioned spanking, first over her microscopic skirt, then across her sheer bikini panties, then on the cheeks of her luscious, bared bottom. While kicking and thrashing to dodge Snow’s hard hand, Sophia’s cute black wig calls attention to itself by slipping askew on the cute girl’s head. Snatching the jet black wig off to reveal the sam forbidden shade of bright red hair that Mary Jane has adopted, Snow redoubles her severity in punishing the hapless pledge, insisting that Sophia strip down to total nudity and bend over for more than a taste of the paddle, strop and cane!

As Sophia’s discipline progresses to the point where her well upholstered backside feels as though it is on fire, the clever Mary Jane remembers an obscure rule in the Lambda Sigma Zeta bylaw that allows even freshmen to call seniors to account for certain egregious infractions. In this case, Mary Jane drops a double bombshell on Snow and Nikki, to wit, that the seniors have been observed in each other’s arms, making love to each other in their very sorority house! And what’s more, Mary Jane has discovered that on their first papers of the year, Snow and Nikki received the grades of “A” and “A-” rather than the perfect “A+” required of all seniors by strict Lambda Sigma Zeta rules.

Mary Jane seizes Snow, intent on revenge for the pain and humiliation she has just endured. Pulling the ravishing pencil skirted amazon across her naked thighs, Mary Jane wastes no time in spanking red roses into Snow’s ivory cheeks, which she bares after a preliminary panty polishing. After hand-spanking Snow’s bare bottom vigorously, Mary Jane insists that the senior who bullied her so carelessly just minutes before, now submit to a proper bend over leather paddling, designed to leave Snow’s glorious seat as darkly pink as a tropical sunset.

Slightly fatigued from spanking and paddling Snow, Mary Jane tells Sophia it is her turn to experience the other side of sorority hazing by taking the sarcastic, ball busting Nikki over her knee and spanking the daylights out of her. But Sophia is strangely reluctant to accept this privilege and in fact refuses to lift a hand against a fellow sister. All of the others are agog at this oddly submissive trend in the new pledge and eye each other mystified. Mary Jane realizes that if she wants to spank Nikki, just the way Nikki spanked her, she’s going to have to do it herself. So once again, the topless beauty assumes the strictly dominant role and turns the reedy natural redhead straight across her knee and gives Nikki the spanking of her life. Directly after which, the wide hipped beauty bends the slim hipped siren over for a finishing varnish with Nikki’s own sentimental spanking object, a rattan cane.

The reluctance of Sophia to fully participate in the spanking routines of Lambda Sigma Zeta house is addressed by the three other sisters in the drama’s grand finale, as the fiercely real freshman is placed on a bench on all fours and instructed to present her bottom for a triple punishment round robin, resulting in the lambasting of her curvy seat with all the implements previously used, in turn. With her ripe, scrumptious body on explicit display from every angle, Sophia reveals not only her classically feminine charms but also her deepest reserves of inner submissiveness; for in spite of her cries, groans and sobs, one can’t help but sense that she is loving the sensations, the attention and the warmth of tough love, sorority style.

Our Sorority Hell Week brings back two of our most popular switchable girl brats, Snow Mercy and Nikki Rouge and introduces our viewers to the attractions of the fascinating Mary Jane and Web Babe of the year nominee, Sophia Locke, a sensual and super stacked cupcake who brings an adorable sweetness to the mix. All four women are smart, sexy, genuine enthusiasts for and regular practitioners of discipline. Their love of the scene and real affection for each other shines through in every moment of Our Sorority Hell Week. This is one of those videos where when watching it, you’ll feel you are with friends.